The past few days have been equally amazing and exhausting. San Diego was lovely, as always, and I managed to pack in quite a bit during the 2.5 days of the ~5 day extravaganza that is ISTE. With ~15,000 attendees and so much to cover, I tried to balance my time between meeting the who’s who of edtech cyberland in the blogger’s cafe, observing sales pitches in the Expo Hall and actually attending some of the sessions. There was so much to take in and it is impossible to capture everything here, so I’ll focus on a few highlights.

Overall, I was really impressed with how organized the entire production was and how many sessions had their resources posted and ready to share. The Twitter conversation (#ISTE12 & a few people were using #ISTE2012) was a constant flow the entire time, so if you were not able to attend or just want to track down some information, I recommend revisiting those hashtags and checking out all the links. I’m still absorbing everything and will probably process it all just in time for San Antonio next year.

I’m just getting ready to head down to sunny San Diego for my first ISTE Conference. I’ve heard the best aspect of the event is the networking so I thought I’d share the social gatherings that I’m planning on checking out. If you’re around, I’d love to meet up and chat about all things edtech in person.

In true edcrunch style, I promise a full report back on my experience and of course I’ll be tweeting throughout the event.

The edtech movement got a boost of good old fashioned Silicon Valley energy at Jason Calcanis’s Launch Edu & Kids conference this past week held at Microsoft in Mountain View, CA.  Calcanis, an entrepreneur, blogger and internet personality behind This Week in Startups (TWiST), hosted his first Launch conference back in Feb 2011 which is designed to showcase unannounced startups. Edtech is definitely trending in the startup scene and there have been several events focused on “education and kids” already this year. I’ve been to quite a few of them, so given that perspective here’s my breakdown on the Good, the Bad and the Ugly.

Marshall Tuck’s keynote was the highlight of the event. Tuck is the Executive Director of Partnership for Los Angeles schools, an independent nonprofit that works with the City of LA and LAUSD to turnaround LA’s lowest performing schools. He opened the event sharing his experiences from working on the ground in some of the toughest schools in Watt and South & East LA, highlighting the importance of teacher collaboration and setting an entrepreneurial culture that embraces experimentation. “Risk is required to achieve change,” and he wasn’t shy with his praise for ST Math, BetterLesson and a few other tools that have helped his team deliver on their mission.

Given that praise, he also touched on the key element that is often missing from too many edtech startup demos, which is the training and support required to successfully integrate tech tools into learning environments. “Early support (with implementation) is just as important as the software.” Amen!

Any effort to bring together a group of individuals focused on providing better tools and resources for our schools and kids in general is a huge step in the right direction. However, the integration of the educator and student perspective felt very superficial. I was hoping that Tuck’s energetic keynote would set the tone for the rest of the event, however, very little focus was placed on how some of the companies highlighted were solving real problems that educators face in the classroom. While Jason and his team made a clear effort to invite teachers and kids to the event, their perspectives were included in what felt like an inauthentic manner. Adding an educator to the judging panel on Day 2 was clearly an after-thought and asking kids to come up and share feedback on pitches in exchange for toys/swag just felt a bit off.

Also, several of the companies were hardly early-stage or unannounced startups, which felt a bit odd presenting with younger startups just coming out of stealth mode.

The deeper issue is that so few conferences and events focused on education even try to engage the educator community. So kudos to Jason and his team for a valid attempt, but it was in no means what we really need from events that are trying to connect educators and edtech startups to create environments fostering true user-centered design. The fact that the event was sold out illustrates the significant interest in this type of gathering, but if we really want to see edtech companies building products people want, we need to include those people (aka educators, parents, learners) in all aspects of the ecosystem in meaningful and authentic ways.

Bridging the tech and education divide is a complex issue and I believe this tweet captures the essence perfectly.

While I keep telling myself I’m going to stop attending events like this, I am off to ISTE later this month and still optimistic about efforts that claim to bring educators and edtech entrepreneurs together to design real solutions for our kids. I’m excited to focus my efforts more on bridging these communities… and more on that soon!

School’s out for the Summer! I had the pleasure of advising a class in the Learning, Design and Technology (LDT) program through the School of Ed at Stanford this spring quarter, Ed 333B: Envisioning the Future of Learning. The course was co-taught by two of my favorite LDT Alumni, Dan Gilbert and Ami Mehta, who framed the class around two key questions “What should every 11-year-old girl in the world know?  How might we make that happen?” taking into consideration how technology will evolve over the next ten years.

To provide real world context for applying business, design and learning approaches to these questions, we conducted three 2-week long design challenges with real clients from Castilleja Girls School, Khan Academy and TeachAIDS. I was excited to bring some of my experiences from Khan Academy into this class, leading a challenge focused on rethinking how to distribute digital content to empower learners all over the world. The students came up with some creative yet practical approaches and I’m looking forward to piloting this project in partnership with Teach-A-Class and Living Values in Nigeria in the coming months. (Stay tuned for a future post on the launch of my next endeavor.) 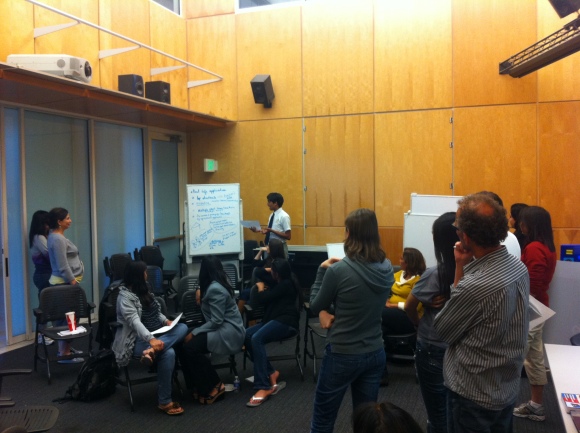 The last class held this past Thursday night was a true culmination of the previous exercises exploring business, design and learning approaches, where the students lead the group in their own unique design challenges. What made the process even more special was the presence of some inspiring LDT alumni like Kim Jacobsen, co-founder of Junyo and local edtech community members, like Neeru Khosla, founder of CK12. However, the guests who really contributed the most were Shivali and Sahil, two Bay Area teenagers who not only provided useful perspective on teens going through the education system today but were energetic and vocal participants in the challenges. 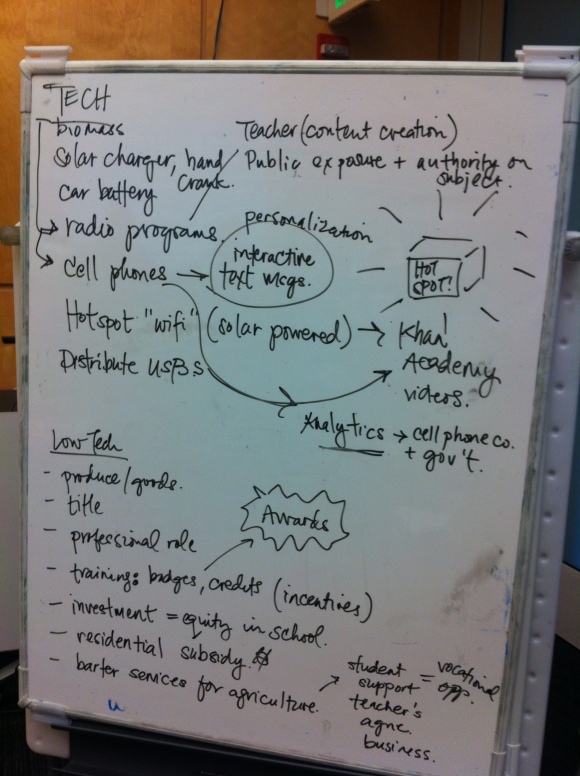 I would love to see more classes like this in the School of Ed that are applying learning & design theories to real-world problems and engaging alumni and community members in the process. I’m glad I was able to be a part of this course and hope to stay connected to these students and projects in the future.